This project provides a framework for automatic and rapid deployment of end-to-end VNF services through VNFFG, which is one of the NFV components documented the ETSI NFV Management and Orchestration (MANO) specification [NFVMAN001]. ETSI GS NFV specification also dedicates a specific section (section 6) to VNFFG based network services. VNFs and VNFFGs are also known by the terms Service Function (SF) and Service Function Chain (SFC) respectively.

This goal of the project is to demonstrate an OpenStack based and OpenFlow compliant solution which will dynamically set up VNFFG so that different tenants’ flows can be steered through different sequence of VNFs. The diagram below shows the VNF Chaining Architecture which is in line with Figure 4 in the ETSI NFV Architecture [NFVSWA001] and ONF Service Chain Architecture [ONF-SFC]. The NFV VNFFG architecture consists of the OpenStack-based VNFFG Manager, multiple OpenFlow based SDN Controllers, and other components in the NFV infrastructure such as the Traffic Classifiers hosted on the Server, the Service Function Forwarders hosted on vSwitch and the Service Functions running on VMs. 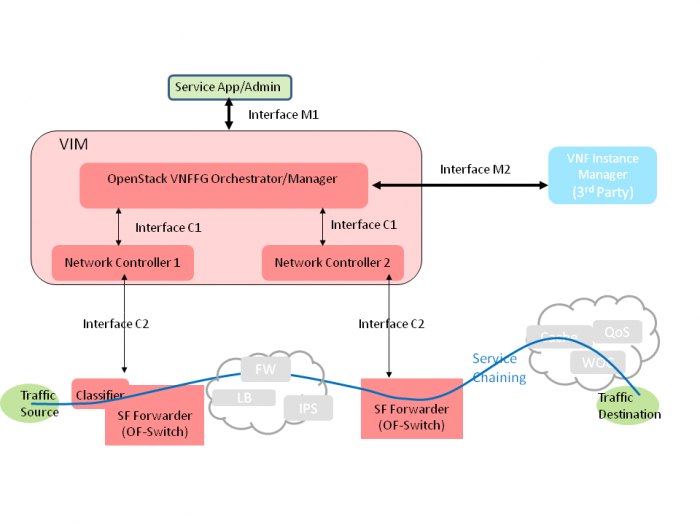 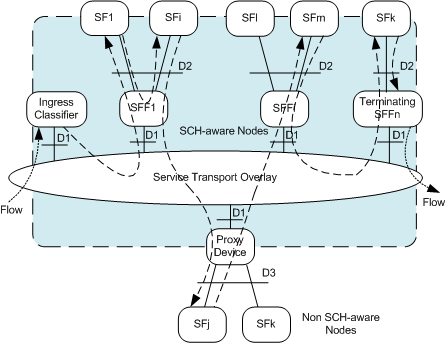