The Transformer project aims at interoperability, functionality and performance testing of selected, important VNFs for a mixed physical NF (PNF) and VNF environment as typically found in service provider networks based on 3GPP standards. Interoperability and functionality testing shall be possible with minimal configuration following a sandbox approach using protocol analyzers on the relevant interconnection points based on standardized interfaces to the native network elements.

The implementation and integration of Cloud solutions in 3GPP based telecom networks is - in majority of cases - expected to be done in a step-wise approach. New NVFI/VNF elements will be introduced into the existing network architecture and will have to co-exist, integrate and interwork with existing native, in many cases physical Network Elements.

The figure below illustrates the coexistence of virtualized infrastructure in a native 3GPP based network environment. This shows a typical scenario during the transformation phase towards a virtualized telecom network. 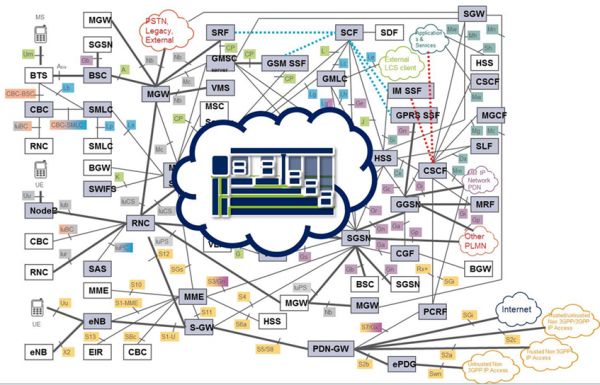 Since the transformation of networks towards a fully virtualized environment will take a long time mixed deployments will be a reality for the years to come.

During Network Transformation service provider requirements with regard to overall network performance and NF characteristics with regard to e.g. latency or high availability (99.999%) have to be met.

From Testing and Performance perspectives, there are three main levels of testing and validations to be considered: * Interworking * Functionality * Performance

The stability and correct interworking on the interfaces is the foundation for interoperability while the balanced and aligned setting of parameters in the involved network elements will be crucial to obtain the optimal performance.

The interworking and functionality testing shall be run as the base prior to performance testing, if possible with a minimal configuration/Sandbox approach and protocol analyzers on the relevant interconnection points based on standardized interfaces to the native network elements.

It is obvious, that the large number of open & standardized interfaces in telecommunication networks lead to a big range of possible configurations of (multivendor) network solutions, including virtualized and non-virtualized elements.

Since the potential full scope of work covering the complete Telecom domain would be very broad and not feasible to be handled in this project, it is recommended to look at selected VNF use cases only.

As an example, the table below provides an overview of horizontal integration points of typical EPC and IMS related VNFs towards native Network Elements:

It is also proposed to start with the interworking and functionality testing prior to performance testing since this will limit the requirements on the lab environment with regard to capacity and redundancy.

The primary documentation is the wiki pages, including the user guide for the testbeds.

Other Test and Performance Projects & Proposals

Propose to start with the interworking and functionality testing prior to performance testing with minimal configuration/Sandbox approach with protocol analyzers.

To be aligned with the first OPNFV reference platform release planned.