Collecting data is the first and most significant step of a failure prediction system, which requires different kinds of data (e.g., log files, real time parameters of hardware and software, environment parameters, events, etc.) from various sources (e.g, NFVI, VIM, etc.). A failure predictor can notify us about failure in advance by analyzing the collected data. Some upstream projects for data collection has existed (e.g. the Monasca project and Ceilometer project in OpenStack for system resource monitoring). However, they do not cover all specific requirements in the OPNFV environment. Therefore our first task is to investigate the gaps between those upstream projects, other OpenStack components and the OPNFV requirements. Meanwhile, we will identify which kind of data is required to collect. After that, we plan to deliver some documents on the VIM northbound API, implementation architecture and plan. Finally, we will implement the failure prediction framework in detail. 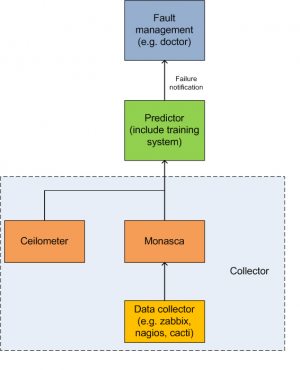 In OPNFV release 2, we limit the scope of this project to the data collector.

Describe the problem being solved by project: As a requirements category project, it plans to solve the problem as following:

Identity a list of features and functionality will be developed:

Identify what is in or out of scope. So during the development phase, it helps reduce discussion: In scope:

Describe how the project is extensible in future: The achievements of this project will be used as the input for next stage, e.g. Integration & Testing, and Collaborative Development.

Identify any specific development be staged with respect to the upstream project and releases.

Are there any external fora or standard development organization dependencies. If possible, list and informative and normative reference specifications.

Any other contributors: TBD

If project deliverables have multiple dependencies across other project categories, described linkage of the deliverables.

When is the first release planned?

Will this align with the current release cadence