The OPNFV platform (NFVI) requires functionality to: • Create a low latency, high performance packet processing path (fast path) through the NFVI that VNFs can take advantage of • Measure Telco Traffic and Performance KPIs through that fast path • Detect and report violations that can be consumed by VNFs and higher level EMS/OSS systems

This project is focused on the development of utilities and libraries to support the above. An ability to measure and enforce Traffic Quality KPI’s (Service Assurance) in the data-plane will be mandatory for any Telco-grade NFVI Implementation, regardless of whether the data plane is implemented in hardware or software. Examples of local measurable QoS factors for Traffic Monitoring which impact both Quality of Experience and 5’9s availability would be (using Metro Ethernet Forum Guidelines as reference): - Packet loss - Packet Delay Variation - Uni-directional frame delay

Other KPIs such as Call drops, Call Setup Success Rate, Call Setup time etc. are measured by the VNF. In addition to Traffic Monitoring, the NFVI must also support Performance Monitoring of the physical interfaces themselves (e.g. NICs), i.e. an ability to monitor and trace errors on the physical interfaces and report them. All these traffic statistics for Traffic and Performance Monitoring must be measured in-service and must be capable of being reported by standard Telco mechanisms (e.g. SNMP traps), for potential enforcement actions.

The output of the project will provide interfaces and functions to support monitoring of Packet Latency and Network Interfaces while the VNF is in service.

The DPDK interface/API will be updated to support:

Specific testing and integration will be carried out to cover:

The following list of features and functionality will be developed.

The scope of the project is limited to the DPDK APIs and a sample application to demonstrate usage.

VNF specific processing, Traffic Monitoring, Performance Monitoring and Management Agent are out of scope. The scope is limited to Intel 10G Niantic support. The Proposed MAC/PHY Interface Counters include:

The Proposed Packet Latency Monitor include: 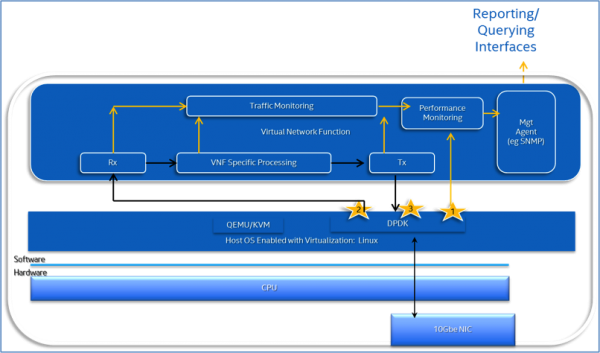 Support for additional types of Network Interfaces can be added in the future.

Scalability: 2x10g Interface support Tests: Traffic patterns include small packets (64 bytes) and average packet sizes of 200bytes. There will be a specific testing resource assigned to the project

The first release of this functionality is planned to align with DPDK 2.0 in March 2015, which should align with OPNFV R1.0 timeframe of 1H 201