This project will enable OpenContrail to be selected as the virtual networking technology in OPNFV deployments. The following diagram illustrates how the components of an OPNFV stack that includes OpenContrail map onto the ETSI NFV architecture. 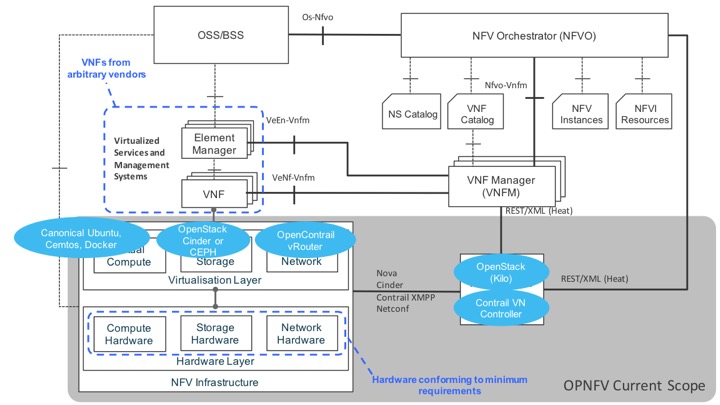 The architecture of OpenContrail and details of how its virtual networking works is described in detail in http://www.opencontrail.org/opencontrail-architecture-documentation/.

The main tasks of the project will be integration of OpenContrail artifacts into the OPNFV continuous integration infrastructure, and ensuring support in the various installer projects. It is not planned that OpenContrail source code will be hosted in OPNFV systems, but rather that pre-built packages will be downloaded into the OPNFV artifact repository, and from there integrated into the various installers. Over time, as new versions become available, it will be desirable to be able to choose the OpenContrail version and underlying operating system when OpenContrail is selected in an installer.

The scope of the project is illustrated below. 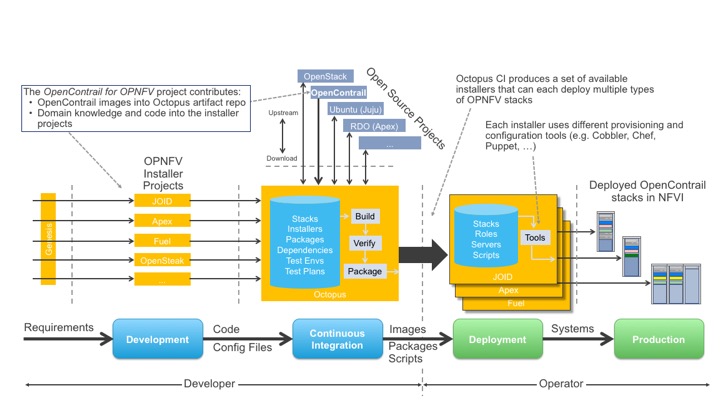 Note that in the diagram, the process illustrated would involve integrating OpenContrail with other artifacts (specifically OpenStack) in each installer project within the OPNFV environment. An alternative is that a pre-integrated OpenStack/OpenContrail artifact could be downloaded from an installer's upstream repository. This is likely to the method employed for JOID.

OpenContrail supports overlay networking that can be applied in many use cases including:

The use cases include scenarios, like service chaining, path visualization and flow mirroring, that are not supported in OpenStack natively. The Contrail controller provides support for these via its GUI and API.

It is planned that the initial release of OpenContrail for OPNFV will be included in the Brahmaputra ("B") release of OPNFV.

The scope of tasks in the project includes the following areas of activity:

Link to TSC approval of the project: https://wiki.opnfv.org/wiki/tsc#august_4_2015