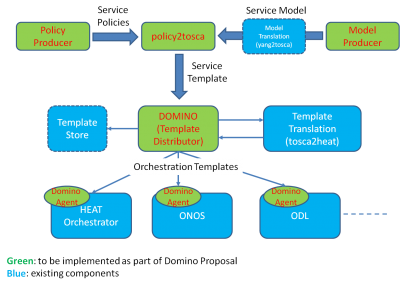 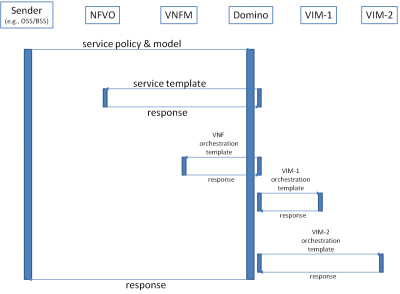 Use Case 1: Using templates for policy based delegation of resource orchestration

End to end service provisioning typically traverses multiple control domains, where different orchestrators/controllers manage the “local” resources in their respective domains. Locality here is in general refers to a relative proximity rather than absolute proximity. These orchestrators/controllers have several advantages, but the most prominent ones are (1) being closer to the resources whose states can be observed with higher fidelity and their actions can be controlled at finer granularity and (2) having domain specific knowledge to deliver the desired service behavior by configuring and programming the resources accordingly. In such a scenario, NFVO that performs service orchestration over multiple control domains can first generate a service template. Then, NFVO can use Domino Service for automatically generating the local orchestration templates and sending them to each local controller/orchestrator. These local templates can specify what actions should be taken autonomously by local controllers/orchestrators by prescribing constraints, conditions, workflow, pseudo-algorithms, expected service behavior, etc. For instance, NFVO can request an auto-scaling service from a target VIM, but also define various resource units (e.g., CPU size, memory size, VM flavor, etc.), workload conditions, and prescribe which resource unit to use to increase/reduce service capacity under what workload conditions.

Use Case 2: Intent based API with domain specific rendering via templates

OPNFV architecture relies heavily on northbound APIs (NBIs) for resource management and orchestration. Keeping NBI simple and generic increases the usability and potentially prevents issues with backward compatibility. A simple API call to a particular VIM such as SDN controller or OpenStack controller can be interpreted in various ways if multiple options are available. 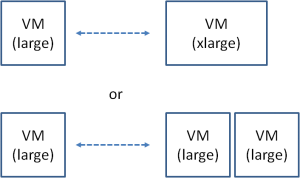 In Figure 3, an example for VNF scaling is provided. VNFM can simply make a call such as VNF.scale(scaling.factor), where the input parameter scaling.factor determines the factor of capacity increase. If for instance scaling.factor is specified as two, then VIM is supposed to double the capacity after receiving the API call. The two options shown in the figure are both meaningful choices in the absence of additional clues about the service. In the first option, VIM changes the configuration of the VM by doubling its CPU, memory, and disk resources (i.e., it scales up the VM instance). This may be done by first pausing the VM, taking a snapshot, and then rebooting the snapshot image with a larger hardware configuration. This clearly interrupts the existing workloads and sessions on the scaled VNF. If the VIM had the capability of doubling the resources without any service interruption (e.g., it can add virtual hardware resources without requiring any image snapshot and reboot), scaling up a given VNF would have a different consequence on the actual services that utilize this particular VNF. Thus, even though the VNF is simply moved to a larger instance size, the service implications are quite different based on VIM capabilities. In the second option, VNF capacity is doubled by simply launching another VM with the same size (i.e., VNF is scaled out). For stateless network functions, this is relatively a straight forward and easy way of doubling the service capacity as long as the VMs do not have a shared bottleneck. If VNF has stateful implementation, state synchronization between the VMs to handle the existing sessions might be a major issue. The main point of this discussion is that without knowing the context of service and behavior/performance modeling of these VNFs going from one configuration to the other, an arbitrary decision by VIM can lead to poor performance. This undesired outcome could have been completely avoided if enough conditions and rules (i.e., prescriptions) were passed onto the VIM from VNFM.

Even for single VNF scaling, as the example shows, templating NBI calls is useful. In reality, service scenarios can be significantly more complex. For instance, VNF definition can be quite complex and can consist of many functions (e.g., vIMS, vEPC). Another popular example is services that are composed of VNF graphs or service chains. Managing the lifecycle and performance of such VNFs or services often require a series of well-orchestrated low level API calls and state maintenance. Thus, capturing all this orchestration only with a high level intent API in many use cases is not an option. Instead the consumer of an API should be able to describe the requested workflow in a resource orchestration template and provide this template to the producer of the API before actually utilizing the API.