As a result of convergence of various traffic types and increasing data rates, the performance requirements (both in terms of bandwidth and real-time-ness) on data plane devices within network infrastructure have been growing at significantly higher rates than in the past. As the traditional ‘bump-in-the-wire’ network functions evolve to a virtualized paradigm with NFV, the focus will be even higher to deliver high performance within very competitive cost envelopes. At the same time, application developers have, in some cases, taken advantage of various hardware and software acceleration capabilities, many of which are platform supplier dependent. There is a clear impetus to move away from proprietary data plane interfaces, in favor of more standardized interfaces to leveraging the data plane capability of underlying platforms – whether using specialized hardware accelerators or general purpose CPUs.

The goal of this project is to specify a general framework for VNF data plane acceleration (or DPA for short), including a common suite of abstract APIs at various OPNFV interfaces, to enable VNF portability and resource management across various underlying integrated SOCs that may include hardware accelerators or standard high volume (or SHV) server platforms that may include attached hardware accelerators. It may be desirable, as a design choice in some cases,that such DPA API framework could easily fit underneath existing prevalent APIs (e.g. sockets) – mainly for legacy implementations even though they may not be most performance efficient. But this project should not seek to dictate what APIs an application must use, rather recognizing that API abstraction is likely a layered approach and developers can decide which layer to access directly, depending on the design choice for a given application usage.

This project proposes to define such DPA API framework by considering a set of use cases that are most common and important for data plane devices, namely:

By utilizing such cross-usecase, cross-platform and cross-accelerator general framework, it is expected that data plane VNFs can be easily migrated across available SHV server platforms and/or hardware accelerators per communication service provider (or CSP)’s demand, while the CSPs could also change the platform or apply new hardware/software accelerators with minimal impact to the VNFs.

As shown in the following figure, there are basically two alternatives for realizing the data plane APIs for a VNF. The functional abstraction layer framework and architecture should support both, and provide a unified interface to the upper VNF. It will be the person configuring the VNF, hypervisor/host OS and hardware (policies) that decides which model to use. 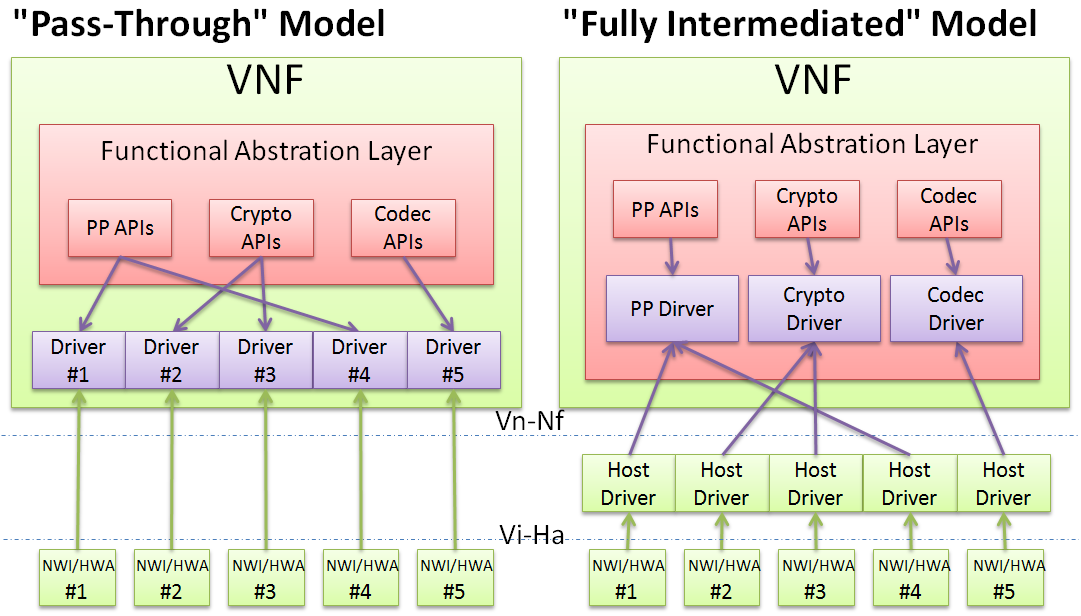 Note: As one can see the scope of the project includes hardware offloading accelerators (or HWAs) on the local hardware platform or general purpose SHV platforms.

In the “pass-through” model, the VNF is making use of a common suite of DPA APIs in discovering the hardware accelerators and/or generalized network interfaces (NWI) available and using the correct and specific “direct drivers” to directly access the allocated hardware resources. The features of this model include:

Alternatively, there is the “fully intermediated” model where the VNF talks to a group of abstracted functional “synthetic drivers”. These “synthetic drivers” relays the call to a backend driver in the hypervisor that actually interacts with specific driver for the underlying HWA and/or NWI. The features of this model include:

As stated earlier, there is an existing problem for application developers who do use various hardware and software acceleration mechanisms that are supplier platform specific, or they would like to be able to leverage such acceleration but are reluctant to have the resultant migration issues when porting software to other platforms. Generally there are varied interfaces to underlying hardware and there is a need to establish a consistent, high performance data plane API that would facilitate development of production data plane VNFs that can make the best use of underlying hardware resources while maintaining portability across platforms.

To this end, the proposed project is intended to

Using the small cell GW VNF as an example, where the VNF is composed of a signaling GW (SmGW) VM and a security GW (SeGW) VM. In this example, SmGW VM is using hardware acceleration technology for high performance packet processing, while SeGW VW is using IPSec offloading in addition. The following figure highlights the potential extensions to OPNFV interfaces that might be needed to enable hardware-independent data plane VNFs.

Names and affiliations of the contributors: