Proposed name for the repository: fastpathmetrics

This project is focused on the development of utilities and libraries to support the above. An ability to measure and enforce Traffic Quality KPI’s (Service Assurance) in the data-plane will be mandatory for any Telco-grade NFVI Implementation, regardless of whether the data plane is implemented in hardware or software.

Examples of local measurable QoS factors for Traffic Monitoring which impact both Quality of Experience and 5’9s availability would be (using Metro Ethernet Forum Guidelines as reference):

Other KPIs such as Call drops, Call Setup Success Rate, Call Setup time etc. are measured by the VNF.

All these traffic statistics for Traffic and Performance Monitoring must be measured in-service and must be capable of being reported by standard Telco mechanisms (e.g. SNMP traps), for potential enforcement actions.

The output of the project will provide interfaces and functions to support monitoring of Packet Latency and Network Interfaces while the VNF is in service.

The DPDK interface/API will be updated to support:

Specific testing and integration will be carried out to cover:

The following list of features and functionality will be developed:

The scope of the project is limited to the DPDK APIs and a sample application to demonstrate usage. 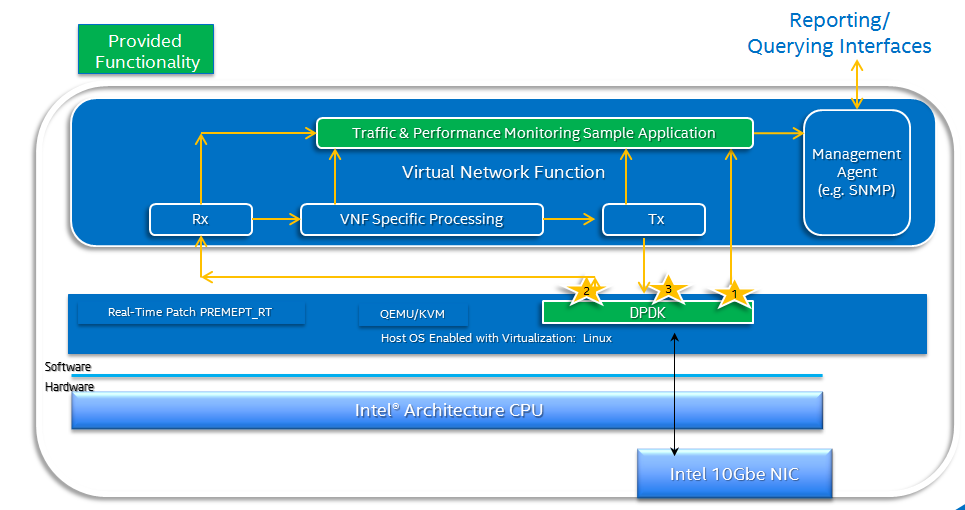 VNF specific processing, Traffic Monitoring, Performance Monitoring and Management Agent are out of scope. The scope is limited to Intel 10G Niantic support.

The Proposed MAC/PHY Interface Counters include:

The Proposed Packet Latency Monitor include:

Support for additional types of Network Interfaces can be added in the future.

Support for failover of DPDK enabled cores is also out of scope of the current proposal. However, this is an important requirement and must-have functionality for any DPDK enabled framework in the NFVI. To that end, a second phase of this project will be to implement DPDK “Keep Alive” functionality that would address this and would report to a VNF-level Failover and High Availability mechanism that would then determine what actions, including failover, may be triggered.

Fig 1. above shows how a sample application will be provided to demonstrate usage. In reality many VNFs will have an existing performance or traffic monitoring utility used to monitor VNF behavior and report statistics, counters, etc.

To consume the performance and traffic related information provided within the scope of this project should in most cases be a logical extension of any existing VNF performance or traffic monitoring utility, in most cases it should not require a new utility to be developed. We do not see the Software Fastpath Service Quality Metrics data as major additional effort for VNFs to consume, this project would be sympathetic to existing VNF architecture constructs. The intention is that this project represents a lower level interface for network interface monitoring to be used by higher level fault management entities (see below).