Meeting Announcements & Minutes can be tracked at http://forum.onosfw.com/c/meeting-tracker. This allows us to capture the minutes from the meeting, but to then have a dialogue without modifying the recorded minutes.

A number of SDN/NFV technologies have been developed since the dawn of open networking. Each approach has demonstrated its unique value in specific application domains. As stated in the white paper, https://www.opnfv.org//sites/opnfv/files/pages/files/opnfv_whitepaper_103014.pdf, OPNFV is to create a common platform that will encourage open source development for NFV and to create a heterogeneous & collaborative environment.

This project addresses integrating an SDN controller of choice based on a target applications or use cases within the OPNFV defined NFVI and VIM framework. It aims to provide end user and open source community with greater flexibility to build service applications, and to help leverage corresponding open source development efforts and results as well. Furthermore, it will create some common framework elements to address multi tenancy support, integration between the network controller and a DPI engine for context-based flow policies. It will also provide driver integration to support the Neutron ML2 plugin.

This project uses ONOS as an SDN controller within the VIM. ONOS is designed and optimized for carriers’ operation environments. The intent framework of ONOS is an ideal match for separating abstraction concerns for deployment of underlay and overlay resources, besides policy-based projects such as Copper. Along with its precise flow control capability, ONOS provides users with greater freedom for controlling data traffic. ONOS represents a simple core plus rich extensible modular service utilities controller design paradigm. It enables developers to quickly create needed applications. Many OPNFV applications can be easily built by extending ONOS' support library. Several potential use cases are listed below:

This project is intended to co-exist with other SDN controllers to ensure users have the flexibility of choosing the best of breed to meet their specific needs, recognizing that "one size fits all" may not always be sufficient. It will follow the procedures as specified in the test and integration projects in the category. It will further comply with the requirements specified in projects Copper, Octopus, BGS, OSCAR, and Pharos. 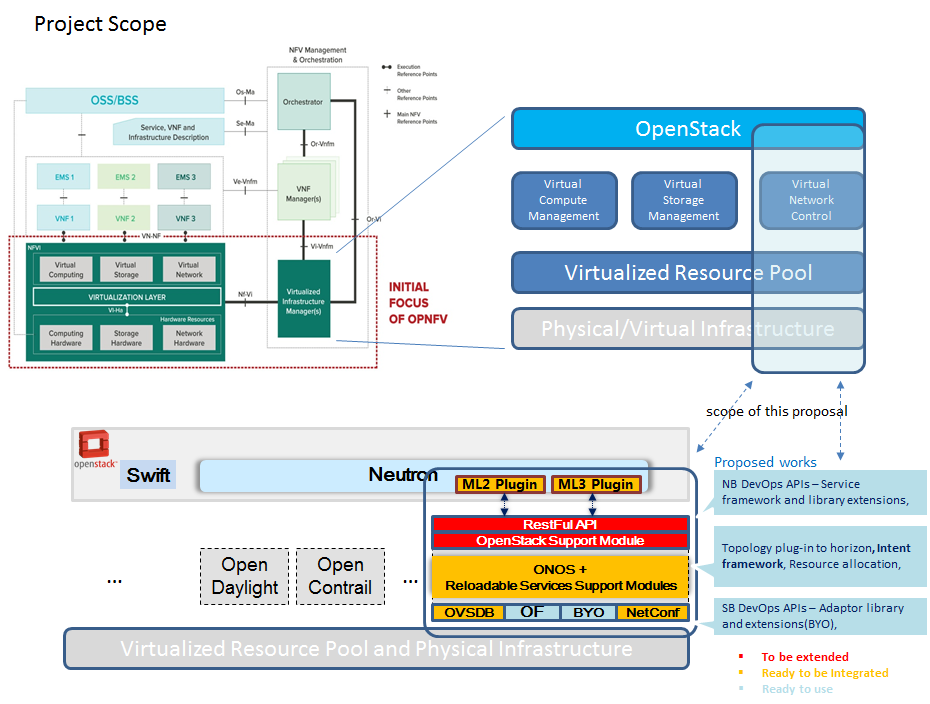